This Saturday’s downtown Nashville art crawl at Downtown Presbyterian Church will be featuring the Vanderbilt divinity student group POESIS in the art gallery with their Ancestral Bodies, Identity, and Liberation; former DPC composer-in-residence Eric Near on piano performing selections from Beatles Sgt. Pepper album as well as original songs, and a viewing of The Jimmy Dean Show featuring Sam Cook (details below). 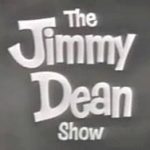 Country singer Jimmy Dean and his band, the Texas Wildcats, got their first television break when they hosted a local show each weekday afternoon on WMAL-TV, the ABC affiliate in Washington, D.C. The show was called Town and Country Time and debuted in January 1955. In 1957, Dean learned that CBS was looking for a new country themed show to go up against NBC’s morning hit, The Today Show with host Dave Garroway. Dean spent his own money and produced a kinescope pilot of The Jimmy Dean Show which he submitted to CBS for consideration. Dean’s show was selected over several other Nashville produced audition tapes. His CBS show, initially named Country Style, became the first nationally televised network show to originate from Washington, D.C., broadcasting from studios at WTOP-TV. According to Dean himself, the show debuted on April 8, 1957 and aired Monday through Friday from 7:00 a.m. to 7:45 a.m. After a 15-minute break, the show was repeated live each day for the Central time zone. The show was a huge hit and beat the Today show in most major market Neilsen ratings. The success of the weekday show spawned The Jimmy Dean Show, a live one hour show that debuted in October 1957 at 12 noon ET. Sam appeared on one of the Saturday programs. Since the show aired live on the East Coast, it must have been taped for a delayed broadcast that began in Los Angeles at 10:30 a.m. Unfortunately, there appears to be no existing film of this show and no information has been located to confirm what song(s) Sam performed.

In this episode Sam Cooke sings:

Tours are on hold till further notice. Thank you for your patience and understanding.